The Rifkind family generously donated funds for the Arleen B Rifkind MD Professorship in Pharmacology. On March 22, 2022, the Pharmacology Dept. held a research seminar in honor of Dr. Arleen Rifkind,  a professor in the Pharmacology Dept. who passed away last year. Dr. Rifkind was an accomplished and beloved faculty member.  Dean Augustine Choi; Dr. Gudas; Amy,one of Arleen and Bob Rifkind's two daughters, Amy and Nina Rifkind; and Dr. Silvia Moore, a faculty member who worked with Dr. Rifkind for over 20 years, spoke at the research seminar.  Their remarks were followed by a stimulating seminar focused on diabetes by Dr. Maureen Gannon, who used to work with Dr. Rifkind and is now a faculty member at Vanderbilt University.  More than 120 scientists and family friends and relatives attended the seminar, which was followed by a reception in the Griffis Faculty Club.

The remarks by Dr. Gudas:

Today, I would like to speak with both admiration and gratitude about the professional accomplishments of Dr. Arleen Rifkind.  Many of you in the audience knew Dr Rifkind as a colleague, a mentor, a teacher, and as a faculty member who contributed to the growth of both the Pharmacology Department and Weill Cornell Medicine.

Dr. Rifkind received her BA degree from Bryn Maur college, and she earned her MD degree from New York University School of Medicine in 1964.  After her internship and residency at Bellevue Hospital here in NYC, Arleen was a clinical associate at NIH from 1965 through 1968. She received additional research training at Rockefeller university, from 1968 through 1971.

Arleen joined the Pharmacology Dept. as an assistant professor in 1973 and was promoted to Professor of Pharmacology in 1983.   She was elected to the American Society for Clinical Investigation, a very prestigious honor, in 1981. She won the Excellence in Teaching Award here at Weill Cornell in 2004. She served on the General Faculty council from 1980 to 1982, was elected vice chairman from 1982 through 1984, and then chair of the General Faculty Council from 1984 through 1986. In fact, Dr. David Hajjar followed her in this role and I understand that she gave him much good advice, for which he is very grateful.  Arleen mentored many other faculty members to advance their scientific careers here. When Arleen passed away, many, many faculty called me to tell me how much she touched their lives and helped them to achieve their professional goals.  Arleen was also a mentor to many medical students, graduate students, and fellows, and the research they have done also stands as a memorial to her.

Arleen was very well respected scientist and she produced an important body of research.  Her research interests focused on the toxic mechanisms of dioxin (TCDD) - a carcinogenic and highly toxic industrial product present in the environment- and the role of a P450 enzyme named Cyp1A, that was increased after dioxin exposure and was involved in these dioxin toxicities. (Some of you may remember that in 2004 Viktor Yushchenko, the former president of Ukraine, a country that has be the focus of much tragic news over the past weeks, was poisoned with dioxin and suffered horribly from that malicious act.)

Arleen and her laboratory members, including Dr. Silvia Moore, who worked with Dr. Rifkind for over 20 years, published over 80 scientific papers, including one just four years ago in which they demonstrated that giving nicotinamide, a form of vitamin B3, could prevent some of the terrible effects in different organs that resulted from dioxin exposure, including cardiac toxicity, thymus atrophy, and fatty liver disease.  These findings suggest several potential therapeutic approaches for preventing dioxin toxicity.

Arleen served as associate editor of the journal Drug Metabolism and Disposition from 1996 through 2006.  She was also a member of many different National Institutes of Health scientific study sections, including the Toxicology study section, for which she served as chair from 1991 through 1994. Dr. Rifkind served on an FDA advisory committee on Special Studies relating to the Possible long term health effects of Herbicides and Contaminants from 1995 through 2000.

During her time as a faculty member in the Pharmacology Department, Arleen and her husband Bob, an attorney, raised 2 wonderful daughters, Nina and Amy, about whom she often spoke.  I met her grandchildren, whom she brought into her lab occasionally! She was justifiably very proud of her family.

As chair of the Pharmacology Department, Arleen always gave me sound advice, and I often consulted her about various medical college and departmental issues.  We also discussed movies, books, New York Times articles, and clothes. I know that she bought the same sweater jacket at Talbots after she liked the jacket I was wearing.

After she passed away, her family decided to establish a professorship in her honor, and I am so honored and grateful that Dean Choi has asked me to be the first recipient of the Arleen B. Rifkind MD Professorship. I know that the family established this professorship to promote the discipline of Pharmacology at the Medical College, and I will do my best to fulfil their expectations and to carry on the tradition that Arleen helped to establish.

I would like to read a statement from Mr. Rifkind on behalf of the family-

When my wife, Dr. Arleen Rifkind, died last Spring she had been a member of the Weill Cornell faculty for 51 years and a professor in the Pharmacology Department for 38 years.  For all those happy and productive years Arleen had prized the opportunity she enjoyed at WCM to run her research laboratory as it explored some of the mysteries of cellular biology, to teach up- coming generations of physicians and scientists, and to share the companionship of bright and collegial colleagues.  It was, therefore, clear to me and my daughters, Amy and Nina Rifkind, that the best possible way we could memorialize Arleen was to endow a professorship at WCM in her name.  This seemed to us especially appropriate by reason of three concerns that Arleen often expressed to us.

We take great pleasure from the thought that for generations to come the sort of research and teaching that meant so much to Arleen will be carried on at WCM by the Arleen B. Rifkind MD Professor. 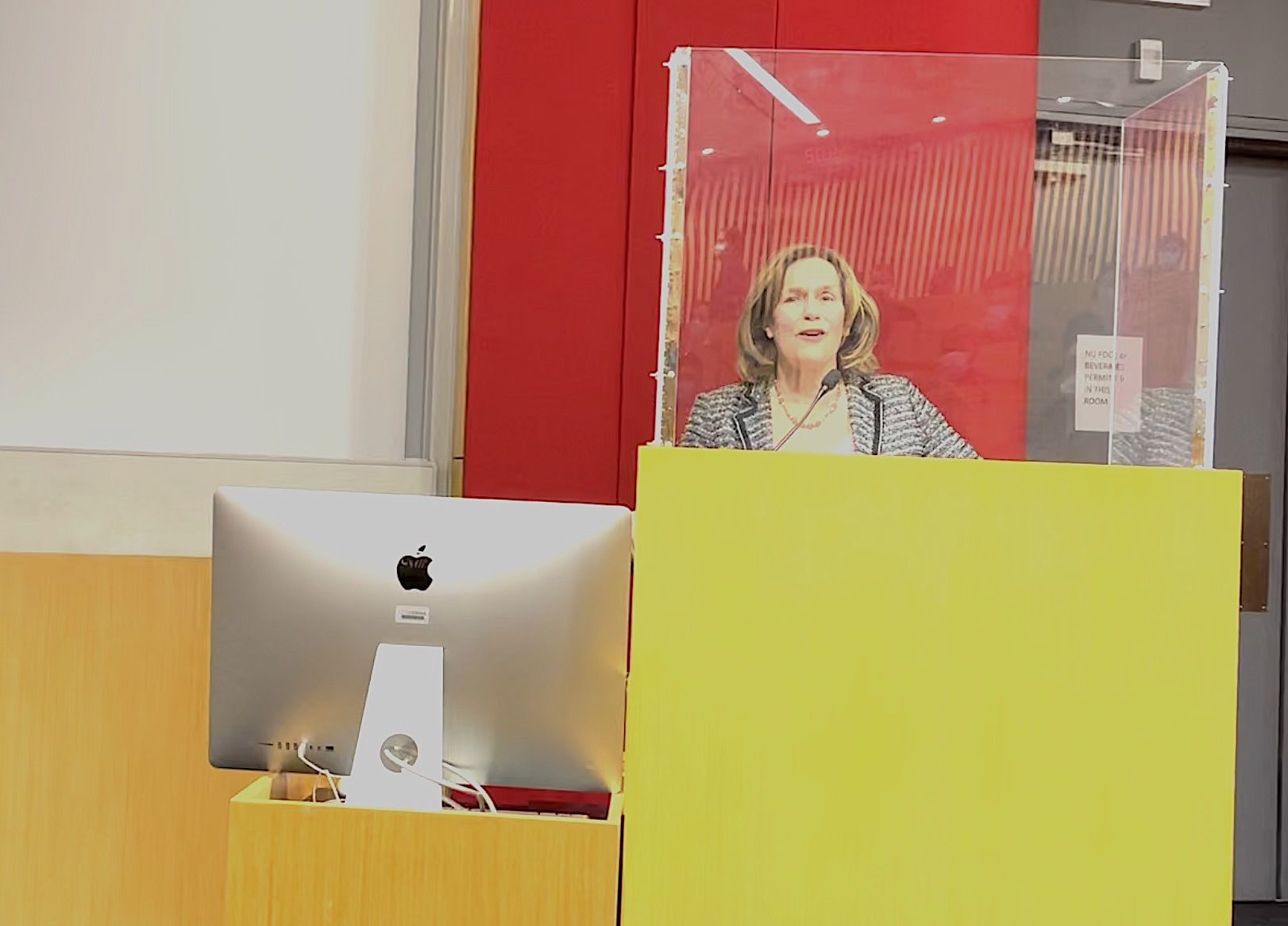 Ms. Amy Rifkind speaking about Arleen on behalf of the Rifkind family 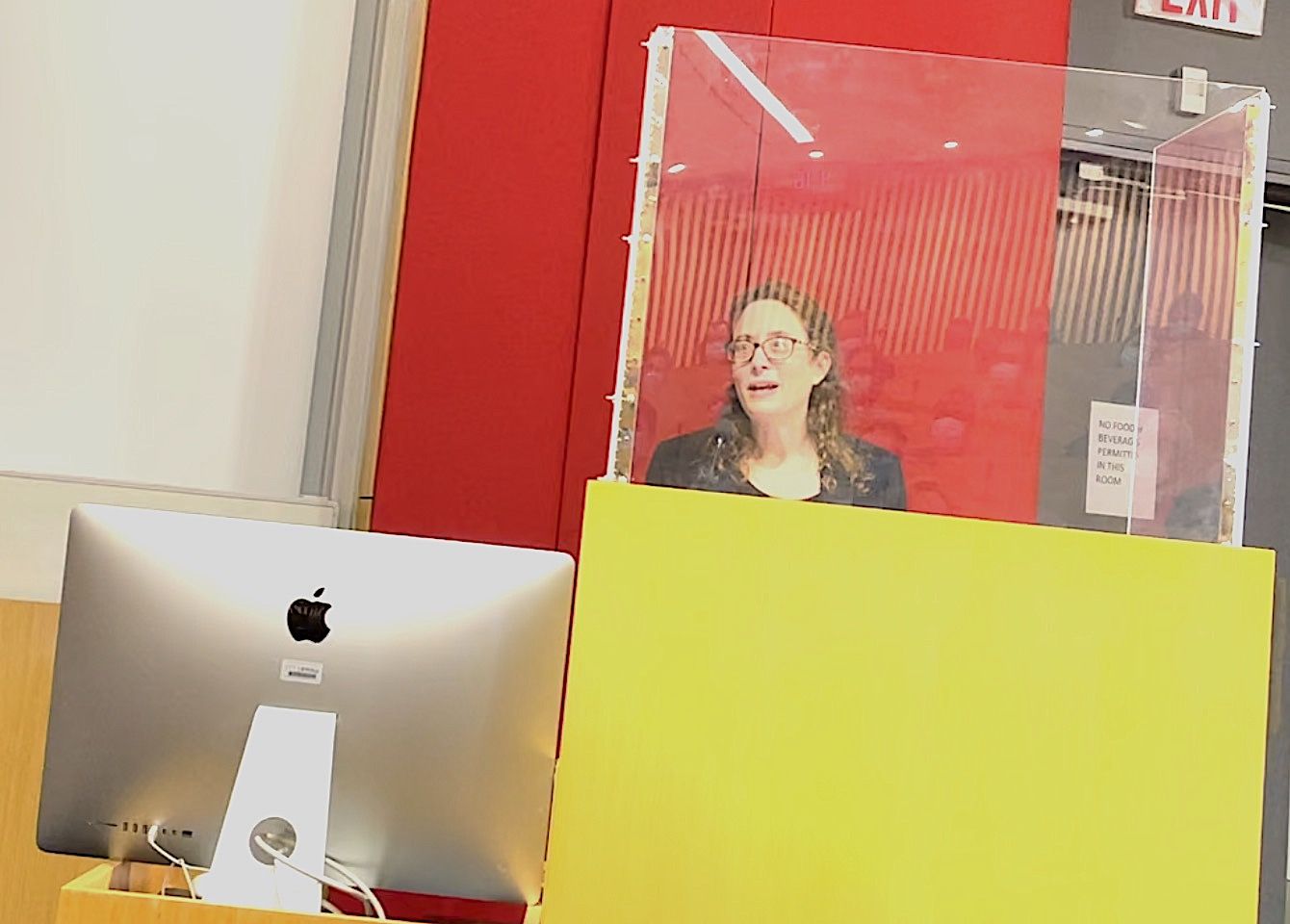 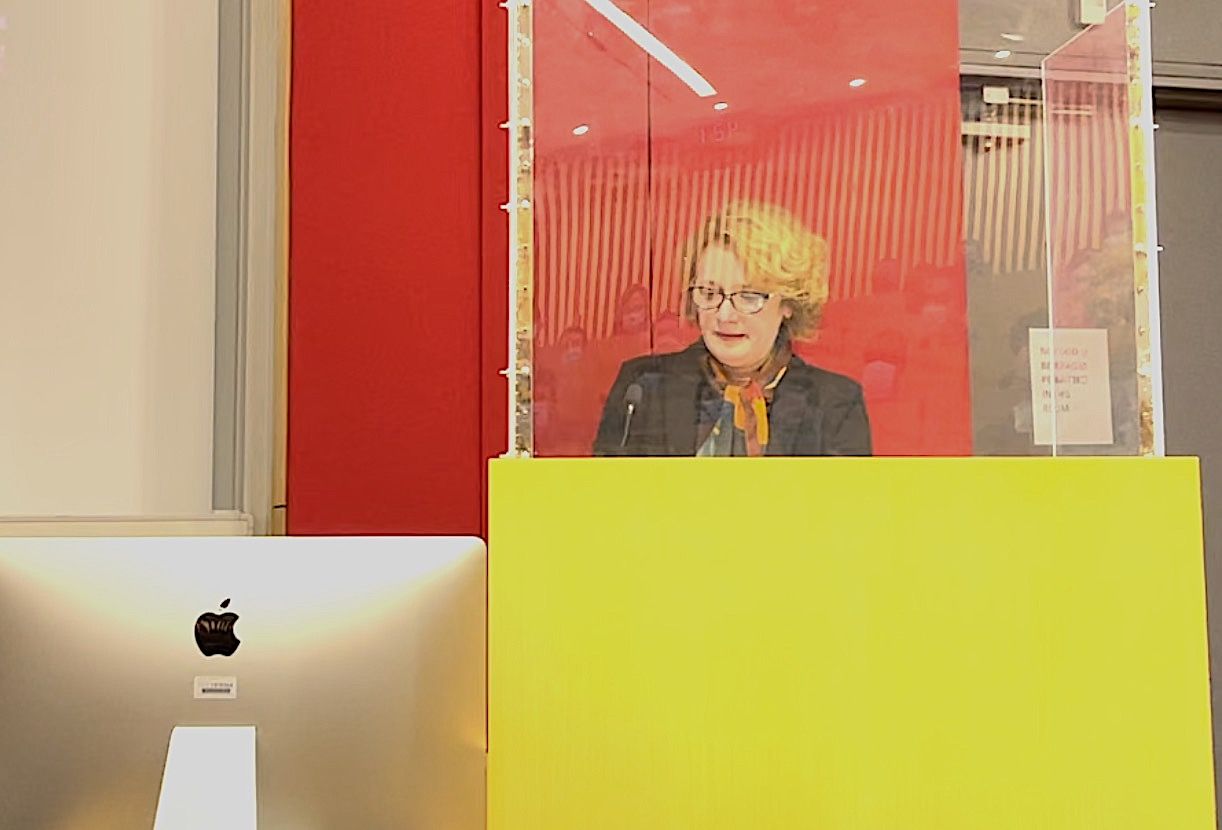 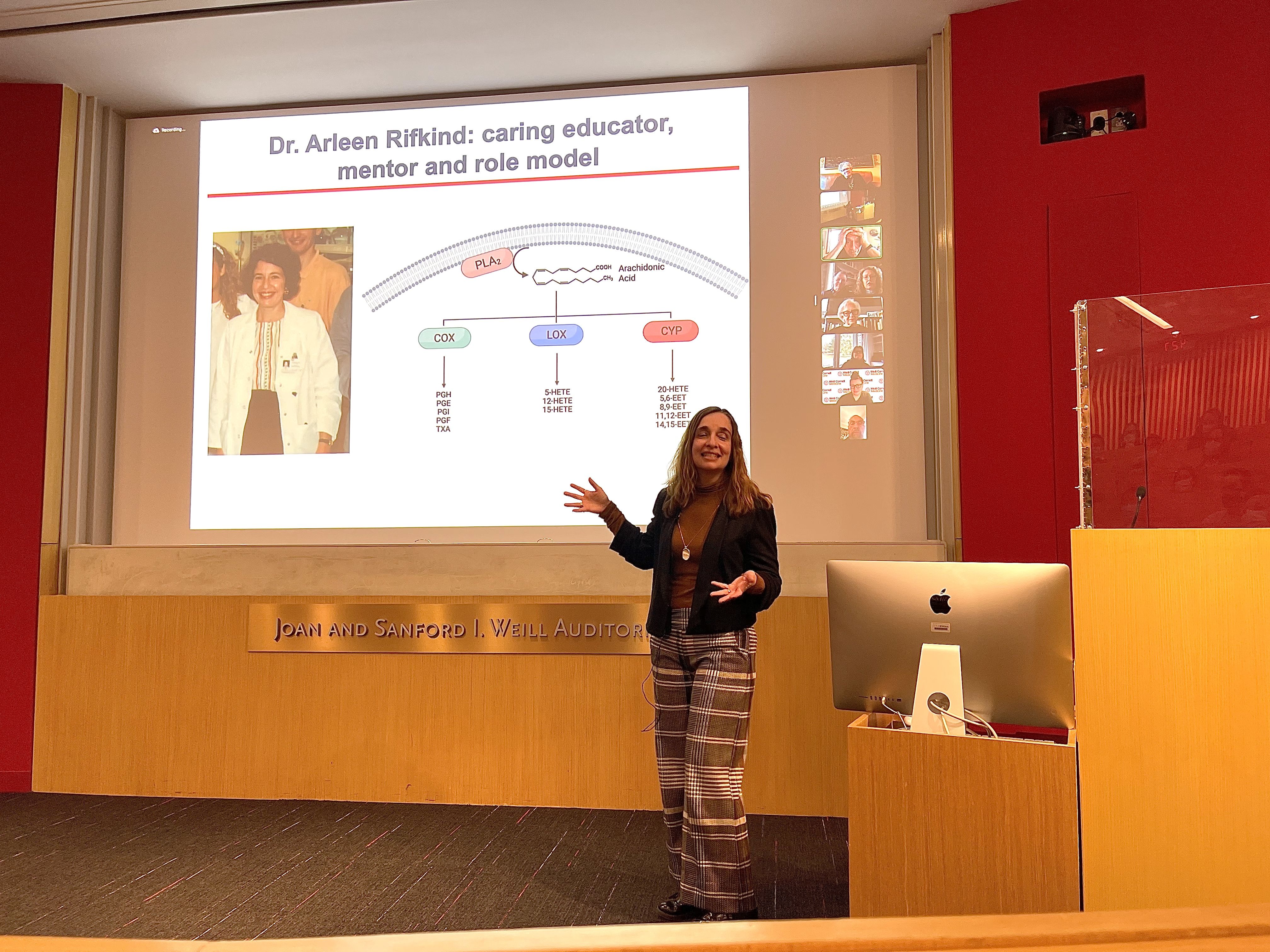 11:15am
Directory News
Apply to a PhD Program Postdoctoral Positions